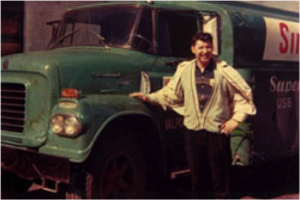 In 1967, Ralph Luke (1931-2007) founded Luke Oil in Hobart, Indiana as a supplier of home heating fuel. Ralph Luke was born and raised in Hobart, Indiana along with his four brothers and one sister. After graduating from Hobart High School, Ralph spent time overseas in the Air Force. Upon his return, he went to work for Van Senus Oil. With the help of Bill Van Senus, Ralph would go on to purchase Van Senus and start Luke Oil Company. His greatest asset was his personality and his ability to inspire others. Humbled by his success and fortune, Ralph never relocated, staying loyal to Northwest Indiana and its institutions.

Today, Luke is a third-generation, family-owned company that has diversified into various commercial divisions.

LUKE IN THE COMMUNITY

Luke is dedicated to giving back to the community it serves. Luke sponsors and donates to more than 20 different charities, averaging more than $100,000 in charitable contributions per year.

Luke has been providing Education Grants for Calumet College for more than ten (10) years. For many years, Luke has also been a large supporter of United Way and the Muscular Dystrophy Association (MDA).

The Luke Companies are active in the local communities and strive to be a committed corporate citizen.